You probably don’t think about the types of pipes in your home. However, knowing the different kinds of plumbing pipes is useful knowledge to have as a homeowner (or business owner). Different pipes serve different purposes, for one thing. But especially in the Denver area, older homes might have outdated plumbing systems that are due for a repiping. Our plumbers can help.

In today’s post, the plumbers at Security Plumbing are going to talk about the five main types of pipes. Whether you’re building a new home or making sure your current plumbing system is built to last, we’ve got the information you need. Read on, and contact our crew for the best in residential, commercial, and emergency plumbing services in Denver! 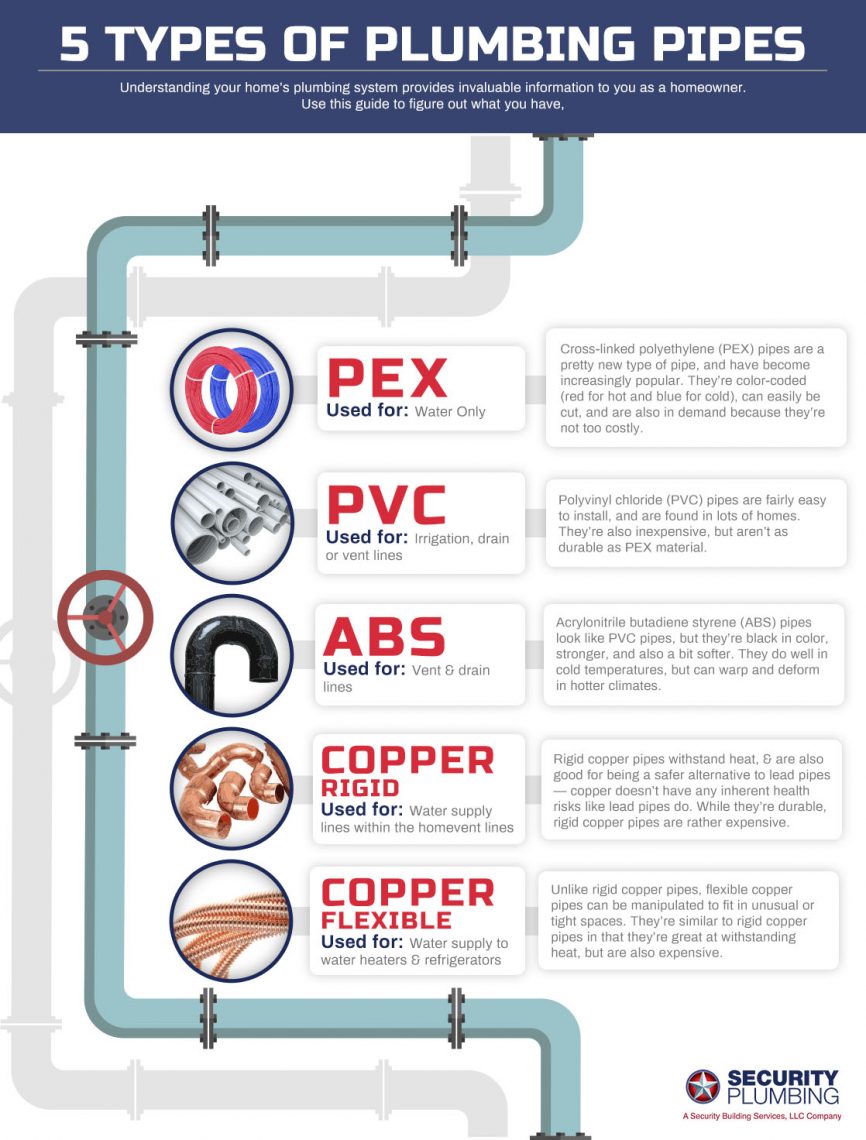 PEX pipes can only be used for water supply, but they’re a more recent technology that’s shown a lot of promise. Both rigid and flexible, PEX can be easily manipulated to fit through walls, ceilings, crawlspaces, and more — as The Spruce reports, they’re “highly flexible, with 90-degree curves possible.”

There are, however, two downsides to PEX. One is that they can’t be recycled, which is a definite disadvantage, particularly as our society tries to become more eco-friendly. The second is simply that, because PEX is so new, we don’t know how they work in the long-term. They’re promising right now, but it’ll be interesting to see how PEX performs decades down the road.

PVC are some of the most common drain or vent line plumbing pipes. They were quickly popularized and began to replace the old staple of galvanized steel, as PVC is much easier to work with and moderately easy to install. As always, however, you shouldn’t feel like you have to take care of PVC work on your own — our plumbers at Security Plumbing are happy to help!

PVC pipes are interesting in that they are glued together with solvents. While rather inexpensive, the glue isn’t all that great in the long run. The Spruce says that “glued pipes can be prone to leaking” and that it’s “fragile and tends to shatter.”

These aren’t as common as PVC, solely because they’re not often building-code permissible. Part of this is because ABS pipes — while stronger than PVC and slightly softer — can warp at hotter temperatures. Warped pipes are one of the last things you’ll want to deal with — but if you run into issues, our plumbers will gladly come to the rescue.

You’ll be able to tell if you have ABS pipes by checking the color. PVC pipes are either white, light grey, dark grey, or a light yellow if they’re CPVC.

Despite the differences in name, rigid copper pipes also can be slightly bent. However, flexible copper pipes are much better for fitting into tight or cramped spaces. Both types of copper pipes are good for dealing with water — unlike lead pipes, there aren’t serious health risks that come from copper.

Copper pipes are also great because they can be recycled, can handle intense pressure, as well as intense heat. The downsides are that they’re expensive, there’s potential for corrosion, they can develop pinhole leaks, and for flexible copper pipes, they’re pretty thin and can be at risk for breaking. Should that happen in your home or business, our plumbers have the technical skills and experience to fix the issue (and fast).

In a future blog post, we’ll dive into the world of plumbing pipes of old, looking at galvanized steel, cast iron, and lead pipes. While not commonly used now, each of these pipes were considered the industry standard at one point or another. There’s still a chance that your home or business could have them, and our plumbers have advice on what to do if that’s the case.

The thing about pipes (and all technology, for that matter) is that there’s no such thing as a perfect system. Even the best and most advanced plumbing pipes are still going to have their drawbacks. Luckily, the plumbers at Security Plumbing are Denver’s best and most advanced technicians, who can handle any plumbing problem that comes your way. Rely on a plumbing team with more than 40 years of experience — call Security Plumbing for all of your plumbing needs!